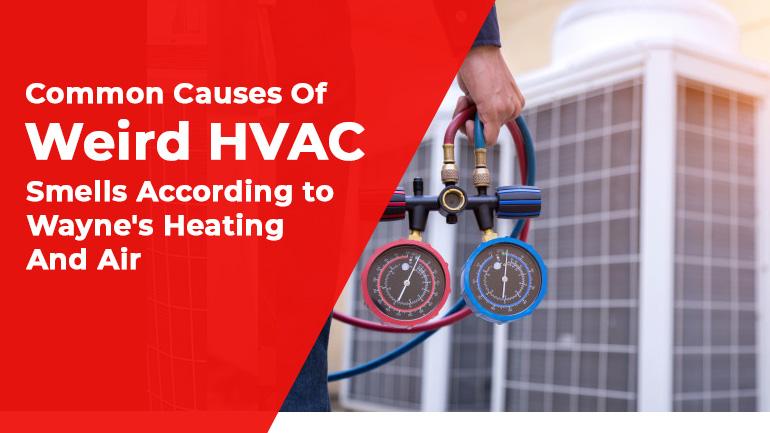 HVAC is one of the most used appliances of any home, and it is used almost all year round, whether it is to cool or heat the house or simply maintaining a healthy indoor environment. Since HVAC's are used a lot, it is natural to experience issues with the HVAC, and one of the most common issues people face with their HVAC is weird smells. At Wayne's Heating and Air, we often get calls from homeowners about strange odors coming from their HVAC that range from mildly inconvenient to unbearable. Our trained technicians deal with such calls on a priority basis, and there are different causes of strange smells that might come from your HVAC. This article will tell you about some of the more common reasons for HVAC smells that we come across, so read on.

When air conditioning repair companies such as us at Wayne's Heating and Air get called to diagnose HVAC smells, they look for anything out of the ordinary that might be causing the strange odor. While most of the time, the causes of HVAC smells are harmless; they may indicate a severe and dangerous problem with your HVAC. With that being said, here are some common causes of HVAC smells:

A dead animal in the HVAC duct system: More often than not, you might sense a smell similar to a dead animal coming from your HVAC duct network. HVAC's have a duct system that is spread throughout your home to circulate air, and if a mouse, bat, or a similar small animal gets into this duct network and dies in one of the ducts, you will smell a decomposing odor. While a dead mouse in the duct network will not damage the HVAC, it is best to call HVAC repair companies to remove the dead animal to prevent the spread of odor and disease.

Mold and must in the HVAC system: If you smell mold from your HVAC system, then you are not alone. The moldy smell is the most common type of odor that homeowners complain about, and the apparent cause of this smell is mold itself. We at Wayne's Heating and Air can find the mold hidden in your HVAC system and get rid of it to remove the odors that come from your HVAC.

Are you looking online for an "air conditioning repair company near me" to help you in solving HVAC odor issues? Just visit the contact us page on our website for any HVAC maintenance.

Wayne was a very nice guy. He was on time with quotes and installation. He did about 5 years ago.

Whether you have a need for heating, air conditioning, cleaner indoor air or just routine maintenance
call us at